Home > Travel > Get On a Flight After Check In Has Closed

Get On a Flight After Check In Has Closed 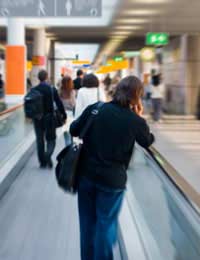 Most airline check-in desks close between 30 and 40 minutes before the scheduled time of departure. In light of the current terrorist threat, constantly increasing queues and passenger numbers, and massive UK airport administrational and logistical problems, the best advice for blaggers is to get to the airport on time!

Although there are a few blags that you may want to try, bear in mind that being let on to a flight after check-in has closed is the exception, rather than the rule.

Check-in desks will not close if there are still people in the check-in queue. If there have been large queues or computer problems it is likely that not all customers will have been checked-in in time and if you arrive a couple of minutes late just join the tail end of a check-in queue, but try not to look too obvious!

Remember that bad weather may delay flights and if your flight is to be grounded for a couple of hours, staff will almost certainly allow you to check-in late. It’s also possible that check-in itself will be delayed!

It is unlikely a check-in desk would close at exactly 30 minutes before departure as airlines do want you to make your flight. If you are up to five minutes late make sure you are very polite and apologetic to your check-in person, but expect to get on the plane.

If you do arrive to a closed desk despite being only a couple of minutes late, don’t waste time. Go directly to the front of a queue at the airline information desk and say you need help immediately. If you are quick enough, you may be able to check-in at another flight’s check-in desk.

You’re pushing it a bit but it’s still possible to board a plane. Again, if queues and computer glitches have delayed check-in then you may be able to join the end of a queue and check-in normally.

If your check-in is closed, go immediately to the airline help desk and find out what you can do. If your check-in desk is still open but staff are unwilling to let you board, it’s time to pull out the big blagging guns.

Here are some ideas, but feel free to make up your own:

Of course, it helps if you are a woman, or have a woman with you who can cry and get a little emotional. Airlines hate creating a scene. Remember that time is precious and if the airline won’t budge after ten minutes, there’s no way you’re getting on board this time.

You’re really pushing things now. If only you’d woken up half an hour earlier! It’s likely your check-in desk is now closed. Go immediately to your airline’s help desk and use the blagging ideas above. You will need to be unbelievably polite, amicable and emotional to stand any chance of catching your plane. What you want staff to do is against company policy, and may even get the fired if found out.

In some countries, providing staff with a “tip” might be useful, although in England people tend to err on the side of caution. It’s looking bad. You might have to accept defeat. You might as well go home.. after all, you can always take a holiday next year!

Get Off A Parking Fine

How to Get a Deal on a Family Holiday

Tips to Get a Better Insurance Deal

How To Ask For A Free Upgrade On A Plane