Home > Ask Our Experts > How to Get Tickets for a Movie Premier?

How to Get Tickets for a Movie Premier? 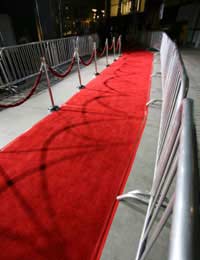 Do you have any tips on how you would go about getting tickets to a movie premiere and maybe being on the after show party list?

Most movie fans dream of getting free premiere tickets to not only see a movie before everyone else, but also in the hope of catching a glimpse of one of their favourite movie stars. There are some tried and tested tips for increasing your chances of getting into a movie premiere and possibly even being on the after show party list.

The Where, When and Who of Movie Premieres

Listen, Look and Write to Get Premiere Tickets

When it comes to movie premieres and after show parties, remember that if you do get tickets, it's likely to be midweek, you'll need to arrive early and you should be prepared for a long night. Your best behaviour and dress will be required before you have any chance of getting into the after show party, so keep this in mind throughout the premiere.

Be prepared to be photographed and to give your thoughts on the movie, and don't annoy the stars if they're in attendance. Everyone has the chance of getting movie premiere tickets, but after show parties are much more difficult.